What is HBO Max, and Is It Worth Paying For?

Decades before subscription-based television became the standard, HBO’s paid service offered movies and original programming alongside music and comedy specials. HBO Max is the newest streaming service from its parent WarnerMedia and will exist alongside HBO Now and HBO Go.

HBO Max Is Premium Content for a Premium Price

At $14.99, it’s not surprising that HBO Max is more expensive than most other online video streaming subscriptions. Fortunately, it’s looking like the content offering will be worth the higher price tag. New HBO Max subscribers (and some HBO Now subscribers, depending on their provider) can enjoy some of the most acclaimed on-demand entertainment around for $14.99/month.

It’s the same price as HBO Now, which is an existing service from HBO (not WarnerMedia) that doesn’t include nearly as much content. It’s also about twice as expensive as the base plans for competitors Netflix and Hulu. Currently, HBO Max will not feature ads. According to Variety, HBO Max will receive a cheaper ad-supported plan in 2021.

Viewers can watch HBO Max through most Android and Apple devices, including Apple TV, iPad, and iPhone. Apps for the service will also be available on most streaming devices like Roku, with the ability to watch through any web browser on your Windows and Mac machine. While the new standalone streaming service officially launches on May 27, 2020, you can already sign up for the service on the HBO Max website. 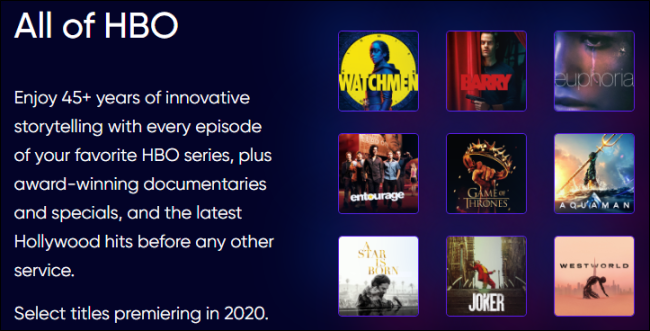 The most attractive aspect of HBO Max is its massive content library. The new service combines the entire HBO library available through existing services like HBO NOW and HBO Go, along with premium content from partners like The Criterion Collection, BBC Studios, and Warner Bros. This is a WarnerMedia platform, after all.

Classic HBO hits like The Sopranos, Deadwood, Game of Thrones, Westworld, and Sex and the City will be a huge draw for new subscribers, alongside a slew of new HBO content that includes some exciting reboots or continuations of beloved shows old and new: Perry Mason, The Boondocks, Adventure Time, Friends, and a variety of heroes and villains from the world DC Comics.

HBO’s comedy specials have always been a mainstay of the company’s offerings, and HBO Max is no different. New, exclusive specials from Tracy Morgan, Conan O’Brien, John Early, Rose Matafeo, Ahir Shah, and James Veitch are all headed to HBO Max by 2021. Lastly, a huge amount of classic films, blockbusters, indie flicks, and original HBO movies will be available on demand.

HBO Max Is Not HBO Go or HBO NOW

Before HBO Max, the network offered two streaming options: HBO Go and HBO Now. HBO Go is an add-on only for cable subscribers, while HBO NOW functions similarly to HBO Max as a stand-alone, subscription-driven streaming service. The major difference between HBO Max and HBO NOW is the larger size of the content library on HBO Max. If you’re an HBO NOW subscriber, you may qualify for free access HBO Max. It all depends on the third-party provider through which you subscribe to HBO NOW. HBO provides a helpful guide to changing your HBO NOW subscription if you’re interested in the larger selection and exclusive content that comes with HBO Max. If you don’t currently subscribe to any HBO service or product, HBO Max is the only name you need to remember.

Using the most confusing branding strategy possible, HBO Max will not be replacing HBO Now. Instead, both brands will exist side by side. This confusion is largely due to the fact that HBO Now can be purchased directly from HBO, but is often bundled into a larger package for consumers through third-party service providers like Hulu, Apple, Google, and Roku.

HBO wants to encourage customers to subscribe to HBO Max directly through HBO rather than purchasing HBO Now through a third-party company that takes a large cut of the monthly payment.

Most viewers familiar with HBO’s content don’t see it as a network for kids. That’s for good reason as HBO prides itself on pushing the envelope in terms of violent and sexual content. Fortunately for parents and kids alike, HBO will be home to a massive backlog of family content including classic Warner Bros. entertainment like Looney Tunes. Most Studio Ghibli films will be available at launch, including classics like My Neighbor Totoro, Spirited Away, and Princess Mononoke.

Sesame Street, one of the greatest and longest-running children’s shows in TV history, has been heartbreakingly underfunded for years by the public coffers that used to support it. Now, the newest episodes premier exclusively on HBO (including HBO Max) before they find their way into the often underprivileged American homes they have always so deeply enriched via public television.

It’s unclear before launching whether or not HBO Max will provide parental controls to allow kids a viewing experience free from inappropriate content. HBO Go offers a simple but effective ratings-based restriction feature for parents eager to reign in the access kids have on the service. Given the way HBO has been advertising their range of kid-approved content, we can only assume that similar controls will be available in HBO Max, if not at launch then shortly thereafter.

Like most new streaming services, HBO Max is looking for a reason to join your existing portfolio of subscriptions. The quality and range of content easily makes HBO Max well worth the price tag of $14.99/month, especially if you only keep the subscription long enough to binge the shows you want.

Tags: HBO, MAX, Paying, Worth
◀ How To Format A USB Or External HDD So It Works On Both Windows & OS X
How To Set A Temporary Profile Picture On Facebook ▶