In a world where rapidly changing technology feels increasingly disposable, one thing remains constant in my computer setup: my 34-year-old IBM 101-key Enhanced Keyboard, commonly known as the Model M. Here’s why I’ll never give up its clicky keys and ideal layout.

Origins of the Model M

An IBM patent diagram of the buckling spring actuator in use.

The 1981 IBM PC came with an 83-key keyboard (commonly known as the “Model F”). Reviewers generally admired it, but some criticized elements of its layout and a few awkward key shapes. Otherwise, it was a beast of a unit—heavy and durable, with a buckling spring keyswitch design that gave it an industrial feel.

Years ago, I had an email conversation with IBM veteran David Bradley, who worked on the original IBM PC. He told me that between 1983-1984, IBM assembled a 10-person task force to address the criticisms of the original keyboard, so they could produce a much better replacement. They considered usability studies, ergonomics, and consumer feedback. They also looked at popular designs from competitors, like the DEC LK201, a terminal keyboard that popularized the inverted-T arrow key layout.

The result was the 101-key IBM Enhanced Keyboard. It was first released for a terminal in 1985, and for PC XT and AT machines in 1986. When most people reference “Model M,” they’re usually talking about  this keyboard, although it technically refers to a family of products with similar characteristics.

The Model M was innovative because it separated its layout into four distinct areas: typing, numeric pad, cursor/screen control, and function keys. It added Alt and Ctrl keys on both sides and two additional Fn keys. Several keys also had increased strike areas, and the Esc key (the “Back/Quit” button in those days) was more isolated to prevent people from accidentally hitting it.

The IBM Enhanced Keyboard was also more cost-effective than the earlier Model F. Many metal parts were replaced with plastic, and a membrane sheet beneath the buckling springs replaced capacitive switches.

That doesn’t mean these savings were passed on to the consumer, however. In 1986, the IBM Enhanced Keyboard cost $295, which is the equivalent of about $695 today. That’s some serious dough—but you did get a serious keyboard.

How I Got Hooked on Model M

In the early 1990s, I used a Fujitsu keyboard with a 101-key Enhanced layout for BBSing. I found I could type about 50 percent faster on it than keyboards with other layouts. Then, the dark times came. I spilled so much soda on my Fujitsu, it eventually broke. For the next decade or so, I used the cheap keyboards that came with the PC clones I used.

Around 2001, I got my first Model M keyboard for free at a local hamfest when a vendor gave me an IBM PC AT he didn’t want to lug back to his car. It languished as part of my collection until late 2006.

When I started writing professionally, I found myself yearning for a sturdier keyboard with a traditional 101-key layout, like the Fujitsu. I got the Model M out of the closet, and thanks to an AT-to-PS/2 keyboard connector adapter, I could use it on my then-modern PC. I must have loved it, because I took it apart for PC World in 2008, and I haven’t shut up about it since.

Why I Still Use the Model M

The manufacturing date of my Model M.

So, yes, I still use my first Model M keyboard, built on Aug. 13, 1986, every day. Heck, I’m using it right now. I’ve used hundreds of other keyboards over the last 30 years, but, for many reasons, I keep coming back to this one. I’ll explain why.

I’d argue that the 101-key IBM Enhanced Keyboard has the ideal computer keyboard layout. It was widely imitated, so almost everyone is familiar with it. After using it for more than 25 years, I know exactly where everything is without having to look down.

Some criticize the location of the Caps Lock key on the Enhanced layout, arguing that Ctrl should be there instead, as it was on earlier layouts. I can understand this, but I haven’t found it difficult to press Ctrl whenever I need it.

It Has Exactly the Right Number of Keys

There was a time when every extra key over the 101-key standard (on American keyboards, anyway) required a special driver to use properly. So, by default, every key that wasn’t on the Model M was annoying.

Some keyboards included keys for forward and backward navigation, volume control, and more. Thankfully, those days are mostly gone, thanks to the USB HID standard. This has made some of those extra keys potentially universal across modern operating systems.

I prefer the minimalism of the Model M. I was an anti-Windows key curmudgeon for 26 years. I disliked it mostly because it got in the way of the familiar keyboard layout I used while playing MS-DOS games like Doom and Blood in the 1990s.

Today, I’m coming around to the benefits of Windows keyboard shortcuts (baby steps on a laptop). I still don’t like the Windows key being stuck between Ctrl and Alt. I’m glad it’s not on my Model M, but I might experiment with mapping it to an infrequently used key.

It Sounds and Feels Satisfying

If you’ve ever used an electric typewriter, you’ll understand the tactile and auditory feedback of the Model M. Whenever you pressed a key on an IBM Selectric, you heard a thunk as the type ball hit the paper. The momentum of the fast mechanical movement vibrated the entire machine.

The secret sauce in every Model M keyboard is a mechanism called the buckling spring actuator. Each key compresses a tiny spring until it suddenly snaps against the side of a cylinder, producing a “click” sound. The spring also pushes a tiny pivoting rocker beneath each key that registers the key press on a membrane below.

Thanks to the snappy springs, you always know when you’ve pressed a key. Because of its high quality, you also know the computer registered the key. The same can’t be said for cheap rubber-dome keyboards.

As a result, the Model M is famously noisy. Every key press generates two clicks, so it almost sounds like you’re typing at twice your actual speed. If I ever type while I’m on a phone call, the person on the other end usually goes silent and then says something like, “Holy cow! What was that?!”

Again, my Model M is 34 years old. I’ve used it almost nonstop for 14 years. It still functions exactly like a brand-new keyboard. There are no misregistered keystrokes, broken keycaps, or worn-off letters. Compare that with inexpensive rubber dome keyboards. They fall apart after just a few years of heavy use.

My model M keyboard weighs over five pounds due to the steel plate inside, which could likely stop a small-caliber bullet. The plastic is thick, rugged, and, despite its advanced age, still doesn’t have any cracks. It stays right where I put it and doesn’t shift around while I type.

Many early models of the Model M keyboard include a modular cable connector. This allowed you to change out the cable if it broke, or swap an AT with a PS/2 connector cable. Also, many Model Ms included two-piece removable keycaps. This made the keys easy to rearrange if you wanted to. A damaged keycap (which was rare) was also easy to replace if you had the parts from a donor keyboard.

The design of the Model M is understated and classy. There’s no gaudy logo, garish angular industrial design, or blinding RGB LEDs to tweak. Visually, it’s just what it’s supposed to be: a keyboard.

With technology changing so quickly all the time, it’s comforting to know that a piece of IBM history is still useful as I mow through a never-ending parade of faster PCs.

I enjoy the unique character of this particular keyboard and take pride in its craftsmanship.

You Can Get One, Too 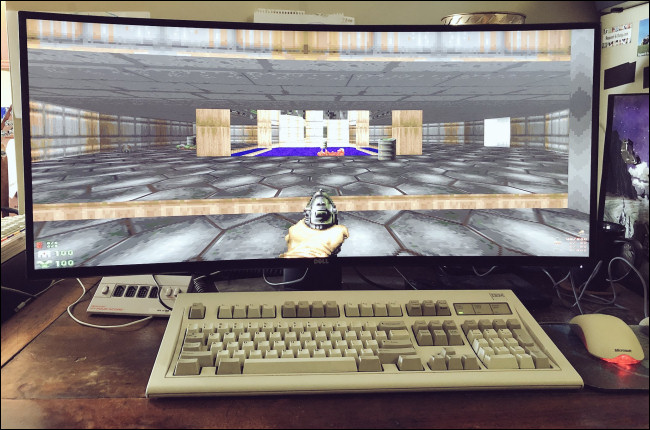 Doom on a modern PC with a Model M keyboard.

If you want to try out a Model M, there are various ways you can do so. You can get one on eBay, or hunt for one at yard sales, flea markets, or thrift stores. Sites like ClickyKeyboards offer refurbished models. You can also buy a modern descendant of the Model M from Unicomp.

Model M keyboards made during the PS/2 era are not particularly rare—some estimates say that over 10 million were manufactured. So, there are a lot of them still floating around, likely in closets, attics, garages, and basements.

In fact, if your heart is set on a vintage model, I’d suggest asking around among friends and relatives. If they have an IBM-brand PC from the mid-to-late 1980s through the mid-1990s sitting around, chances are they have a Model M keyboard as well. Bake them some cookies and casually ask about it next time you stop by.

To connect a Model M to a modern PC or Mac, you’ll need an adapter you can plug in to whichever vintage cable (PC AT or PS/2) you have in a USB port. You can usually get PS/2 to USB solutions on Amazon for $5 to $7 that work well, but can be occasionally glitchy.

You can also find a more specialized adapter, like this AT to USB model designed by enthusiasts, for around $40 on eBay. It’s also possible to buy a cable with an integrated USB converter that plugs directly into a Model M’s modular SDL port on the back, if your unit has one.

With these converters, the Model M behaves like a standards-compliant plug-and-play USB keyboard device. This means you can use it with Windows, macOS, and Linux (or even Haiku if you’re feeling zesty). Some people even plug them into their iPads.

If you love the Windows key and worry you might miss it while using a vintage Model M, then have no fear. It’s possible to map the Windows key to another one you might use infrequently, such as Caps Lock or Right Alt. There are also modern variations of the Model M keyboard that include a Windows Key made by Unicomp.

Also, if you like volume control buttons, it might be possible to map those to Scroll Lock and Pause on the Model M. (I’m going to experiment with this idea soon.)

Thanks to ever-accelerating upgrade cycles in computer technology, there’s a common fallacy that old computer tech is always obsolete by default. Thanks to the Model M, though, we know that’s simply not true. I suspect discerning typists everywhere will be enjoying Model M keyboards for decades to come. Happy typing!

Tags: 34YearOld, IBM, keyboard, model
◀ Play YouTube Videos In Any Aspect Ratio You Want
How To Share A USB Printer Over Your Network In Windows 10 ▶